The HP56 pepper, also called the Death Strain pepper could possibly beat the current record holder The Carolina Reaper. On August 7, 2013 the Carolina Reaper was officially recognized by Guiness World Records as the hottest chili in the world testing at 1,569,300 Scoville Heat Units (SHU) average with a peak value of 2,200,000 SHU. This new death strain “HP56” blows that out of the water with preliminary testing of over 3,000,000 SHU!

As the news reporter describes in the video, the HP56 has a delayed burn, which could trick unsuspecting victims into initially thinking this pepper isn’t hot at all. The first 10 seconds you can taste the full flavor of this pepper; the heat kicks in and never stops building. The extreme concentration of capsaicinoids of the HP56 may cause unseasoned pepperheads to hallucinate. 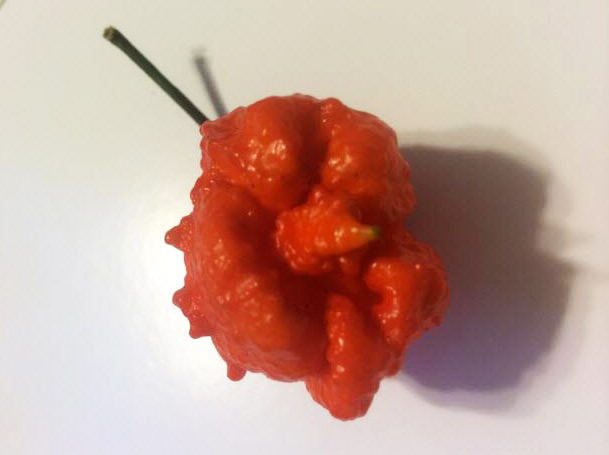 This pepper still has to go through rigorous testing to see if the average SHU does in fact beat the Carolina Reaper. Stay tuned to PepperHead to see if it does prove to be as hot as claimed before it can be included on our Top 10 Hottest Peppers List.

For now you will just have to settle for the current world’s hottest. Pick up Hot Pepper Seeds, Hot Pepper Plants, or Pepper Powder.

image and video by: wbtv.com

Recent Posts
Popular Products
Join Waitlist We will inform you when the product arrives in stock. Please leave your valid email address below.